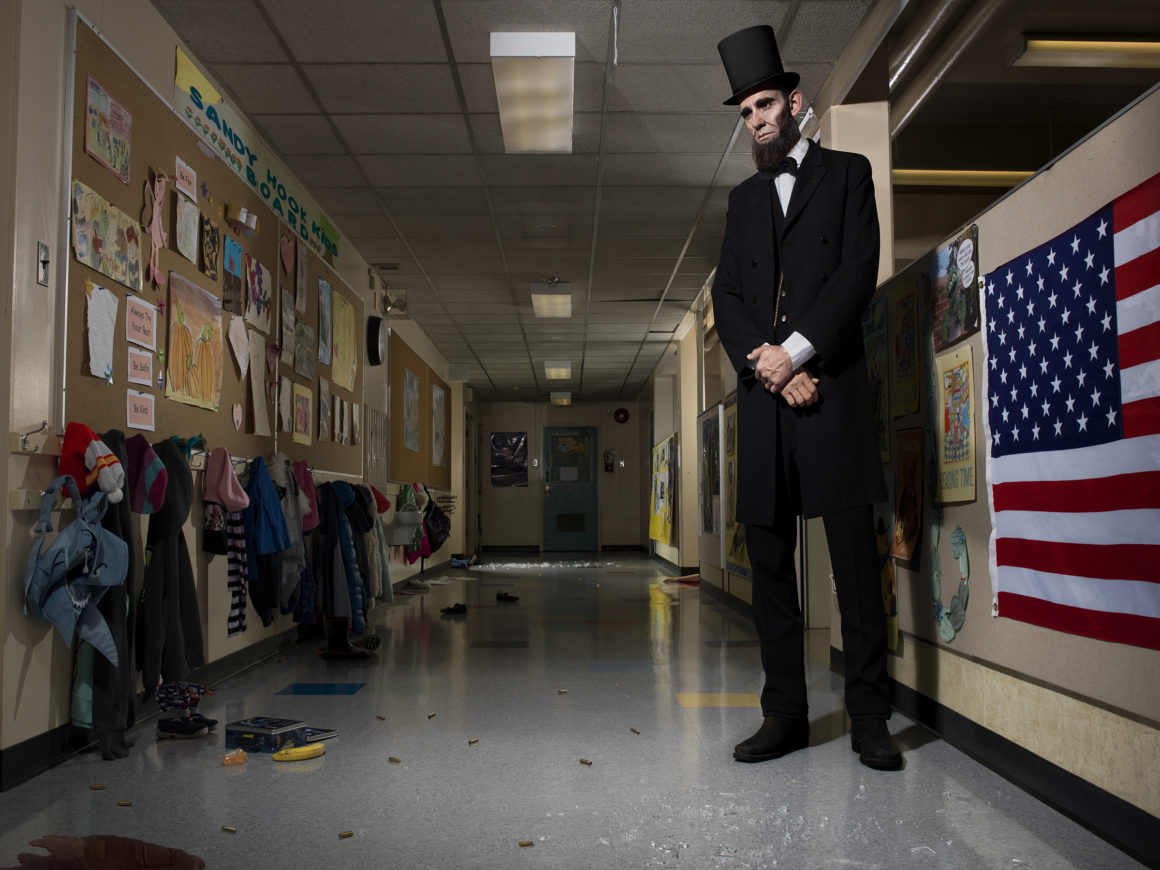 10 COMMANDMENTS (2019) Inspired by the election of Donald Trump in 2016, and religious influence and interference within the US body politic, 10 large-scale tableaux pieces strikingly relay social commentary breaking down the myth of an ideal American society. The series seeks to examine the socio-political makeup of the U.S.A through its political icons, the presidential figures that mark the most notable and controversial chapters in US history. These juxtapositions aim to deconstruct the layers of political deceit, exposing latent hypocrisies and challenging the integrity of a system that is supposed to be a model of democracy and social progress. Unlike Goldstein’s other series, 10 Commandments reads more immediately, more overtly activist. The artist is, more than ever, wearing her disillusionment on her sleeve, compelled to offer commentary as someone whose life and work have also been shadowed by the now-fractured American ideal. As such, the series demonstrates a new facet of Dina Goldstein’s artistic repertoire, one of political criticism. The award-winning 10 Commandments series has been covered extensively in the media and online.  DOHO Magazine and in The Globe and Mail newspaper

THE MAKING OF 10 COMMANDMENTS 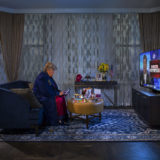 Commandment 1, TRUMP, You shall have no other gods before Me , 2019 President: Donald Trump Term 2016- Money and Celebrity is God in today's America, as the culture of commercialism and narcissism is highly valued and cultivated. In a surreal reality Donald Trump, the businessman and former reality TV star was elected the 45th President of the United States. Propaganda and Fake news denigrated the free press, boosted by the ideology of populism, underpinned Trump’s 2016 election campaign. He took on the world stage with his hubristic and childish tweets, largely spreading disinformation and distrust. Many of his most-liked tweets contained falsehoods, while the topic he posted about most frequently, “fake news,” was a weapon for undermining information. Terms such as ‘fake news’ and ‘witch hunt’ created the illusion of popularity for ideas that actually have no basis in reality. This created a bandwagon effect for supporting false or misleading things, attacking institutions, health care, science, education, the government, and the media. Themes: Greed, Desire, Temptation, Power Location: White House private residency

Commandment 1, TRUMP, You shall have no other gods before Me , 2019

Commandment 2, REAGAN, You shall not make for yourself a carved image or any likeness of anything, 2019 President: Ronald Reagan Term: 1981–1989 This is the era of the SELFIE. Access to social communication and the mobile phone camera has opened up a new genre of self-identity. How do Americans portray themselves on social media? It’s all wrapped up in a desire to document while living, and to appear happy every moment.  Themes: Ego, Immortality, Persona, Heroic Individualism Location: 9/11 Memorial NYC

Commandment 2, REAGAN, You shall not make for yourself a carved image or any likeness of anything, 2019

COMMANDMENT 3, NIXON You shall not take the name of the Lord your God in vain, 2019 Richard M. Nixon : 1969–1974 The concept of an omnipotent power can now be attributed to large corporations that monopolize and monetize personal information. Google, and the other big tech giants have amassed too much influence over our economy and daily lives. Google’s anti-competitive actions have protected its general search monopolies and excluded rivals, depriving consumers of the benefits of competitive choices, forestalling innovation, and undermining new entry or expansion. While Nixon was running for re-election in 1972, operatives associated with his campaign broke into the headquarters of the Democratic National Committee at the Watergate complex in Washington, D.C. Several members of Nixon’s administration had knowledge of the burglary and while Nixon denied any involvement, secret tapes of White House conversations later revealed that the president had participated in efforts to cover up the criminal activity. Facing impeachment by Congress, Nixon resigned from office on August 9, 1974. Themes: Data Collection, Privacy, Heroic Individualism  Location: Google Headquarters

COMMANDMENT 3, NIXON You shall not take the name of the Lord your God in vain, 2019 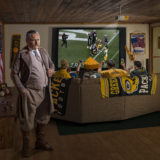 COMMANDMENT 4, ROOSEVELT, Remember the Sabbath day, to keep it holy, 2019 President: Theodore Roosevelt Term: 1901–1909 The weekend is when extravagant sports games are aired; activities are schedules, shopping, and virtually everything else but quiet and rest. At the turn of the century there was much debate about the dangers of Football, at that time players wore little protective equipment, and sustained gruesome injuries. Newspaper editorials called on colleges and high schools to banish football outright. Roosevelt acknowledged that the sport required reforms and moved to facilitate legalization of the forward pass, abolished the dangerous mass formations, created a neutral zone between offense and defense and doubled the first-down distance to 10 yards, to be gained in three downs. These important changes reduced fatalities and became the foundation of the now beloved modern sport of American football. Roosevelt was one of the most activist Presidents. His many accomplishments included the building of the Panama Canal, cracking down on business monopolies, and creating many national parks. Themes: Myth Of Progress, Lack of stillness Location: Man Cave

COMMANDMENT 4, ROOSEVELT, Remember the Sabbath day, to keep it holy, 2019 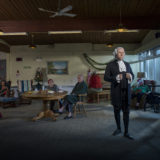 COMMANDMENT 5 WASHINGTON Honor your father and your mother President: George Washington Term: 1789–1797 The value of ‘the wise elder’ archetype has diminished. We often see seniors abandoned in rest homes and left without proper care. Those affected by mental illness suffer the most. Themes: Respect, Isolation, Mortality, Meaninglessness Location: Urban senior Living Home George and his mother Mary Ball Washington infrequently exchanged letters and Washington’s other correspondence contains very few references to her. While some historians present George Washington as a dutiful son who fulfilled societal expectations, others claim that he lacked the warmth and kindness of a loving son. Themes: Respect, Isolation, Mortality, Meaninglessness  Location: Urban senior Living Home

COMMANDMENT 5 WASHINGTON Honor your father and your mother 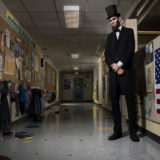 Commandment 6, LINCOLN, You shall not murder, 2019 President: Abraham Lincoln - Term: 1861–1865 The second amendment to the constitution allows access to guns in America and has placed weapons into the hands of the disgruntled and mentally ill. Children and innocents are regularly targeted in mass shootings such as the Sandy Hook Elementary shooting in 2012. Lincoln led the Union into the Civil War to preserve the nation and end slavery. He was assassinated just five days after the Confederate armies surrendered.  Themes: Violence, Despair, Mental Illness Location: Sandy Hook Elementary School

Commandment 6, LINCOLN, You shall not murder, 2019 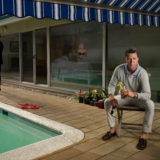 COMMANDMENT 7, JFK, You shall not commit adultery, 2019 The institution of marriage has been the cornerstone of the American middle class. Recently the Country opened itself up to same-sex marriage with some States rejecting the notion. Social and religious stigma rejects divorce and leaves couples frustrated within their marriage. The stray is common with those who follow their natural human desire. Throughout history, we find that even a President, sitting in the White House, could not abstain. In 1962, the United States and the Soviet Union hovered on the brink of nuclear war during the Cuban Missile Crisis. Kennedy eventually forced the Soviets to back down. He was assassinated in the third year of his term. Kennedy is the only Roman Catholic to become President. Themes: Desire, Sexuality, Lust, Virtue  Location: Home Palm Dessert President: John F. Kennedy - Term: 1961–1963

COMMANDMENT 7, JFK, You shall not commit adultery, 2019 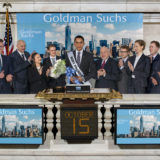 COMMANDMENT 8, OBAMA, You shall not steal, 2019 Theft comes in many forms. The pure greed displayed by Wall Street during the Great Recession 2008 was blatant and distressing. As people lost their homes and were left homeless, Wall Street was bailed out rejoiced. Barack Obama is the first African American president of the United States.Under his Presidency not a single Wall Street billionaire was convicted for the sub prime housing scandal that cost millions of Americans their homes. Themes: Greed, Ego, Power  Location: New York Stock exchange Balcony President: Barak Obama Term: 2009–2017 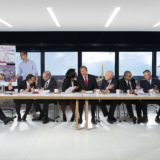 COMMANDMENT 9, BUSH , You shall not bear false witness against your neighbor, 2019 President George W. Bush, like his father, George H.W. Bush led the United States into war against Iraq. The main premise for the war was that Saddam had weapons of mass destruction (WMDs) and that these were at risk of falling into the hands of terrorists. In the end, however, there were no such weapons, and Saddam’s links to al Qaeda were unproven. Themes: Social Manipulation, Propaganda, Media Persuasion  Location: Arlington Advertising   President: George W. Bush Term: 2001–2009

COMMANDMENT 9, BUSH , You shall not bear false witness against your neighbor, 2019 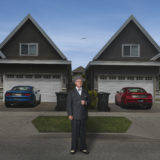 Commandment 10, TRUMAN, You shall not covet your neighbor's house, 2019 The American Dream was once in the reach of the middle class. While “don’t spend above your means” will always be sound advice, keeping up with the Jones’s has become endemic within many households. This aspirational materialism, along with rapid growth of medical and housing costs, and dwarfing incomes, makes it challenging for many families to sustain a desired lifestyle without leaning on credit cards and loans.

Commandment 10, TRUMAN, You shall not covet your neighbor's house, 2019