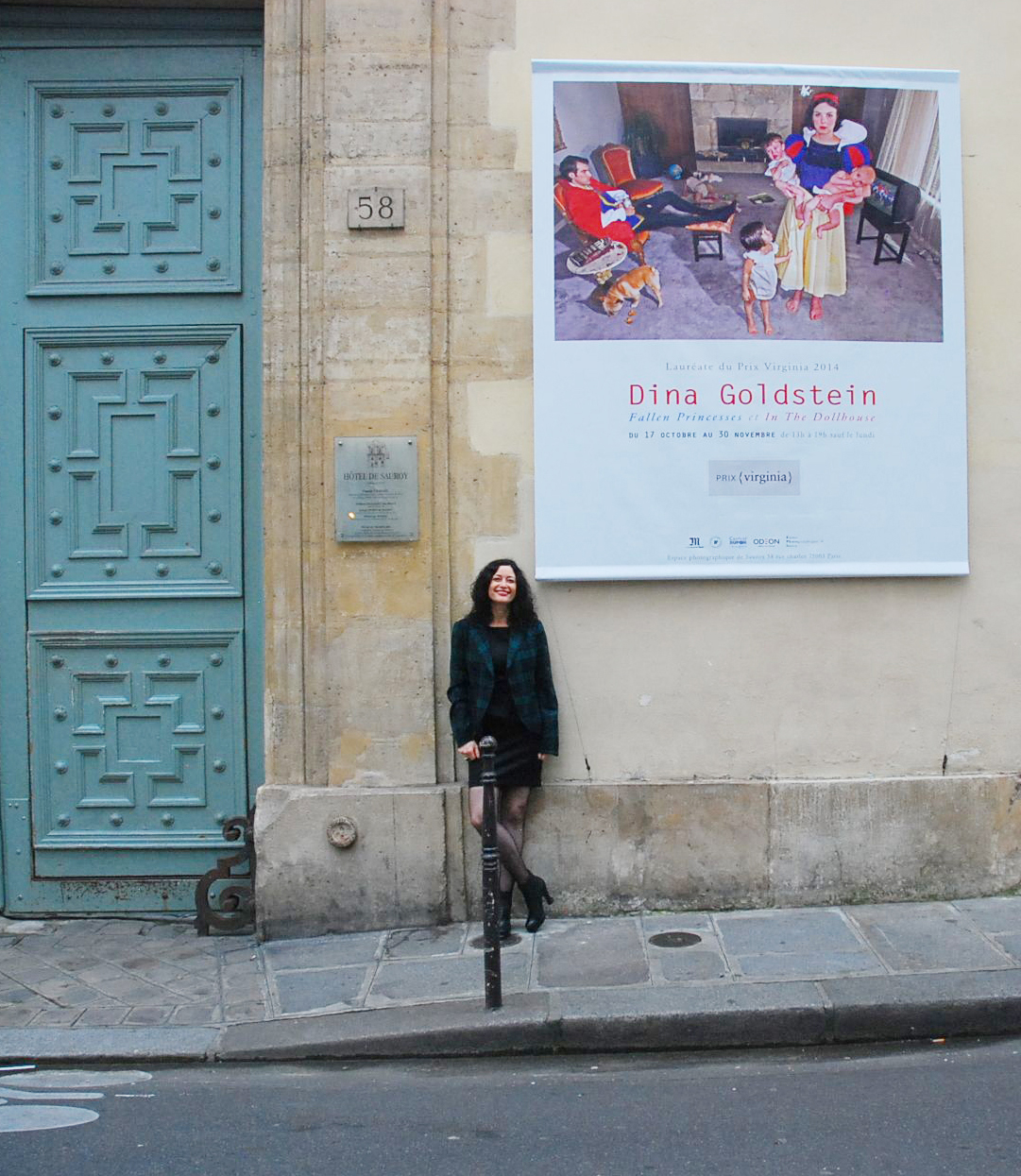 Dina Goldstein began her career 30 years ago as a photojournalist, evolving from a documentary and editorial photographer into an independent artist focusing on large-scale productions of nuanced Narrative Photography tableaux. Her work is highly conceptual and complex social commentary ; incorporating cultural archetypes and iconography from the collective common imagination with narratives inspired by the human condition. Leaning into the visual language of pop surrealism, she stages compositions that expose the underbelly of modern life, challenging the notions of cultural influence and inherent belief systems. The vivid and provocative still imagery emerges through an entirely cinematic technique, with Dina’s established methodology following a precise pre- to post production process.

Dina Goldstein’s first foray into staged photography was in 2007, when she was inspired by personal events to produce work critical of the “happily ever after” motif, exploited by Walt Disney and embraced by Western society. As a feminist and new mother, she was disturbed by the stereotypical societal tropes Disney was perpetrating about women and girls. Fallen Princesses (2007- 2009) , is a 10 piece tableaux series featuring humanized fairy tale Princesses dealing with modern day scourges such as Cancer, addiction, obesity, war and environmental degradation. For this work Dina was awarded the Prix Virginia (2015), an international prize for Women Photographers, and an exhibition was mounted in Paris, France. The Fallen Princesses are often referred to within education and academia, included in school textbooks as teaching tools, and subjects of discourse within the classroom. The Fallen Princesses series is continually featured in the media and widely exhibited internationally.

Dina’s next project, In The Dollhouse (2012), a highly conceptualized 10-part sequential narrative  plays out within a very pink adult sized dollhouse, and stars human Barbie and Ken dolls. In this alternate reality Barbie breaks down and cuts off her long blond locks, as Ken emerges liberated discovering his authentic self. In The Dollhouse ignites discourse and debate about unattainable beauty ideals, the myth of perfection, and challenges the concept of ‘beauty as power’ and a source of ‘happiness’. The series is widely exhibited and disseminated, most notably garnering a request from the Musee D’Orsay In Paris, France, to include, “Haircut,” within its 2013 Frida Kahlo and Diego Rivera catalogue. In The Dollhouse pieces are also included within the FotoMuseo, Colombia collection.

In 2013 Dina opened her studio ‘XX’, with a retrospective to celebrate 20 years of photography. For this exhibition Goldstein selected 20 pivotal pieces that contributed to shaping her vision.

Her next undertaking, a massive initiative, Gods Of Suburbia (2014), is a critical exploration of established and fringe religions. Deities, drawn from polytheistic to Abrahamic tradition are humanized, mortalized and thrust into modernity. By offering an iconoclastic interpretation of how ancient belief systems fit into modernity’s three pillars: technology, science and secularism, the surreal incongruities created challenge viewers to contemplate the relevance of ancient ethics and inherent belief systems. The series has been exhibited internationally at museums, festivals and galleries. The Last Supper remains most popular in Italy.

Extrapolating upon Dina Goldstein’s past themes of identity within Western culture, Modern Girl (2016)  diptych portraits series, explores diasporic identity, and central to capturing the tensions of past traditions and the push for modernity and individuality. 12 satirical adverts re-imagine the adored and iconic illustrated advertising posters of 1930s Shanghai, China in order to relay social commentary. This to encourage and promote critical thinking  about excessive materialism, global commercialism, and the use of female models to sell products. The Modern Girl exhibition opened November 2016 in Paris, France.

Snapshots From The Garden Of Eden (2017), was commissioned by the Contemporary Jewish Museum Of San Francisco for the group exhibit Jewish Folktales Retold: Artist as Maggid; based on 100 Jewish tales, collected and retold by folklorist Howard Schwartz, in the book ‘Leaves From The Garden Of Eden’. For this Goldstein photographed a series of 11 large-scale black and white theatrical images, modernized scenes from each of the four primary types of tales: fairy tales, folktales, supernatural tales and mystical tales. The series features rich and ethnically diverse characters, made up of divine royalty, temptresses, supernatural spirits, and Hasidic figures. Goldstein uses dreamscapes and symbolism to explore, and subvert popular traditional Jewish themes like destiny, temptation, justice, wisdom, blind faith and circumstance. Snapshots From The Garden Of Eden is a traveling series, exhibited at the Museo Ebraico, Venice, in 2018, and currently being presented internationally at Jewish museums and centers.

Dina Goldstein’s latest work The 10 Commandments (2019) , inspired by the election of Donald Trump in 2016, exposes the deceit, hypocrisy and misogyny displayed within the US body politic. The series seeks to examine the socio-political makeup of America through its political icons, the presidential figures that mark the most notable and controversial chapters in American history. Each tableau features a President portrayed through the prism of their politics, popularity and/or notoriety, further contextualized by a contemporary backdrop, and assigned one of the postulates of the Ten Commandments. These, often humorous, narrative juxtapositions aim to deconstruct the layers of political deceit, exposing latent hypocrisies and challenging the integrity of a system that is supposed to be a model of democracy and social progress. Although most political of her work yet, it aligns with the theme she continues to revisit in her art, one of disillusionment.

Goldstein’s work has been the subject of academic essays and dissertations, and has been covered extensively in media around the globe. The projects are studied and taught in elementary and high schools, art and photography programs and gender studies.  Dina is represented internationally, and consistently exhibits at festivals, biennales, commercial galleries, art centres and museums.

Dina’s life revolves around the vibrant community of East Vancouver, where she lives with her family, and runs ‘The Bunker’ studio.

Dina Goldstein’s using her photography to start a provocative conversation. 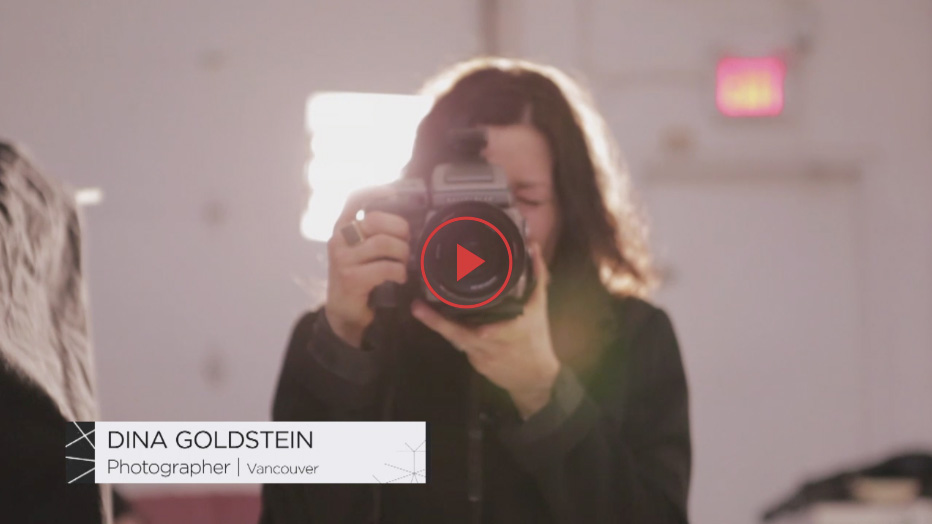